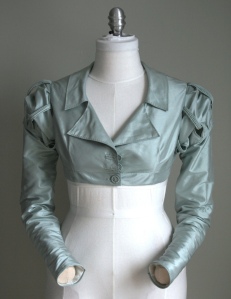 The completed project. Isn’t it lovely?

This is a blog I just discovered today, and LOOK AT THE PROJECT completed here!

A gorgeous pale blue dupioni silk Spencer. Absolutely stunning and extremely well-executed, entirely by hand. I cannot praise its maker enough! Oh, to have an excuse to start building a Regency-era wardrobe. Alas, I am still rounding out my late 1890s interpretation collection, so it will be a while…

This is my entry for February’s Historical Sew Monthly challenge “Blue”. It wasn’t my initially intended entry, which was supposed to be a smart and clever-looking new pale blue wool coat made from a late teens/early 20s pattern I have. However, after doing a muslin and fiddling with it a bit I just wasn’t feeling it. I still hope to make it someday, but I wasn’t feeling totally enthusiastic about it and I think it’s too straight a silhouette for most of the clothes I wear, even though it has a little more flare than most styles from that period.

So, about the middle of the month I decided to completely switch tracks and make something that was nowhere on my sewing list/queue. Very practical decision (please note the sarcasm). I rationalized it to myself by saying that I had intended <someday> to make a new spencer from a piece…

The Pragmatic Costumer has done it again! This time, Liz explores her love for centuries of embellished stockings…and I have a new favorite place to shop!

Some women are obsessed with shoes. I love them, too, but my love affair with shoes is more practical than fantastical. My love of stockings, however, has grown exponentially over the years. Not only are they fun, they completely alter the way shoes fit. A shoe that is too big or even too small becomes much more comfortable with the right stocking. Keeping you warm as the weather turns chilly is a huge bonus as well.

When I talk about stockings, I don’t mean our modern idea of stockings– the sheer, skin tone nylons or the cutesy sock-shapes we hang up at Christmastime. Though they are both rooted in historical stockings, they are like the two seperated halves of the stocking story. Stockings in the past were knit or sewn, and while silk can be made very sheer, our ancestors…

This pattern, with a few slight modifications, will be the foundation of my Fall/Winter “Best” Dress for Meet Laura Ingalls Wilder presentations. The fabric and notions are chosen, and now comes the long process of muslin mock-ups and several rounds of decision-making. On tap: sleeve volume, cuff width, belt and collar dimensions, “one petticoat, or two?” and “which hat frame will make the best icing on the cake?” I already am in love with it, and have indulged in enough extra yardage to make a special modern-day piece to wear when I’m not portraying Mrs. Wilder. Debut scheduled for September, 2014, but sneak previews will be forthcoming along the way.

Showing off my new 1896 Ulster last March…and the flannels underneath it! With thanks to the eternally patient Gregorio for the photo session, this is possibly the best series of photos in Laura garb to date. Of course, all that wonderful Laura garb is the product of the superbly talented Laurie, who deserves the highest of praise for the fantastic design and reproduction of so many period pieces. The Ulster takes my interpretation a giant leap forward, by offering yet another insight into the weight, scale, restrictiveness, functionality, and sometimes cumbersome nature of 1890s clothing.

In a few days, I’ll be embarking on yet another cross-country (well, most of the way…) trek from my home in New England to various points West, reaching, at minimum distance, Keystone and Custer State Park in South Dakota. With any luck, and some careful planning, I will be able to add at least a new state or two to the running tally of those I’ve visited in my lifetime. I’d like to get to Wyoming, Colorado, and a new-to-me section of Nebraska so I can finally see parts of the Oregon Trail. Originally, the plan also included some historic sites in the OKC area as well as return visits to 2 primary Laura sites: the Little House on the Prairie Museum (site of the Ingalls family’s “Indian Country” settlement near Independence, Kansas) and Bessie and Manly’s final home at Rocky Ridge Farm in Mansfield, Missouri with one of my Laura friends.  But, as is de rigeur for my experience, Life is What Happens When You’re Making Other Plans.

A little hiccup (okay, a really big one, but I’m trying to be cheerful here) in the health of my baby kibbie, a.k.a. Quinn, has necessitated a delay in my departure.  Quinn is a fighter, and still very kittenish for her 15 or so years, but, as a former stray, the unknowns of her early history make her a bit susceptible to various health problems, and she ended up in surgery on the day of my planned departure for the west.

Just prior to my departure for GCV&M Laura Ingalls Wilder Days, August 2012.

Not being one to take pet care lightly, I elected to delay my trip by a week to give her time to get the healing process underway and make sure she’s improving before I hand her off to my very capable family for the next several weeks.  Plus, I like to snuggle her, and since I have the time off from work anyway, why not get a few more hours of QT with kitty while I do some of the reading I would otherwise do in a lonely hotel somewhere in Huskerdoo?

Besides, I’ve seen many of the states I’ll be trekking through before, and my mission on each trip is to experience something new and visit places I’ve always wanted to go.  I’ve seen a lot of states over the years, and have racked up a relatively impressive number (…of states visited…get your mind out of the gutter!) by some standards.

Hole in the Mountain, at the border between Minnesota and South Dakota, Highway 14. This view is looking east, because the sky was prettier and this side of the sign was more legible for some reason. Strange, I would think this would be the side where all those sweeping winds would scour the lettering flat!

How many states have I been to?  Well, I’m not at 50, nor 40, nor even 35.  BUT, I’m working on it.  I’ve always enjoyed traveling, and take every opportunity to visit somewhere new.  Beginning in early childhood, when my parents took us to visit family in Upstate New York, or friends in Florida, travel has nearly always involved a roadtrip. By the time I had a driver’s license, I was planning when and where I’d go the minute I had my own car (which, in my family, meant when I had saved enough of my own earnings to buy and insure one!).  Almost deliberately, I chose a Toyota with a standard transmission so I would have to learn to drive a stick, which meant that, between classes and shifts at the grocery store, I was taking little Joey out for a lot of practice trips on back country roads through various counties in northern New Hampshire.  Almost immediately, I began to discover just how much I adored exploring rural countryside, and roadtrips of any distance were soon a way of life. 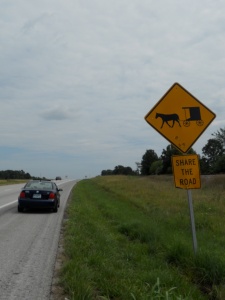 Over the years, I found ways to fit travel into my meager budget by combining missions.  A friend wants to go to her nephew’s birthday party 3 states away?  Road Trip!  My new favorite band will put me on the guest list at shows around the northeast if I promote them everywhere I go?  Road Trip!  My boss needs to get something delivered 100 miles away by 5 pm?  Road Trip!!!!!  Any excuse I could find.  Before I knew it, I’d racked up over half a million miles on various old beater cars: the Toyota, two VW Foxes, a Saab, and two Jettas. 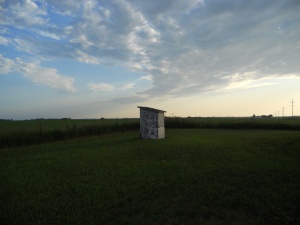 Are You Privy? Just behind the town house, east of De Smet, SD.

These days my mileage total is upwards of 850k, over 6 cars, in some 20 years. The newest car was 4 years old (but I kept it until a cargo van ended its life at age 12); all of the cars were at least a dozen years old when they retired, and all but one of the retirees registered well over 200,000 miles on the odometer.  The record holder for most miles in shortest time was Gretyl, acquired in May 2010 with 119k miles.  Twenty-one months and NINETY THOUSAND MILES later, while attempting to return from a Laura gig a few hours from home during a nasty ice storm, Gretyl, with her superior handling, spared my life but sacrificed her own.  The odometer read just over 209,000.  Something tells me she had a lot more miles in her, but the frame, although intact, would never be quite right again, and I couldn’t risk it. But, I was so impressed with her fortitude in my near-death experience that I went out and bought another Jetta just like her…

Where have I been in all those miles?  Hmmm…well, some states I have only driven through a corner of, not even stopping to buy gas or eat a meal.  So, I will skip those.  If we count only places where I have at least gotten out of the car, looked around, eaten, or stayed overnight, the tally as of now is 30/50 States. That may not sound like much, but I can tell you I have spent about a year’s worth of days and nights traveling in the U.S., even though I have lived in the same state my entire life.

So, where have I done all this roaming?  All of New England, all of the Eastern seaboard, plus…Ohio, Indiana, Illinois, Michigan, Wisconsin, Minnesota, North Dakota, South Dakota, Nebraska, Kansas, Oklahoma, Missouri…30 states, plus Nova Scotia, Quebec, and Ontario.

In recent years, I have been visiting LauraLand on an annual basis.  In 2012, I was there twice!  This year, I hope to finally ride the 1880 Train between Keystone and Hill City, South Dakota.

I hope to finally see the Badlands for longer than just the occasional glance out the window as I’m whizzing down the highway in a hurry to get back to Brookings for a gig the next day.

I hope to visit Prairie Homestead, and the land Carrie Ingalls homesteaded as a single “spinster” near Philip, South Dakota, prior to her marriage 101 years ago.

I hope to have a bison steak (finally!) instead of just bison burgers…although where else but the 1481 can you have a meal of Bison Burger, Buffalo Sweat, and Badger Buns? 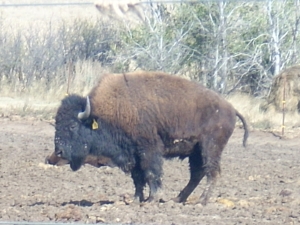 A bison farm along the Missouri River, close to the North Dakota/South Dakota border, October 2009. 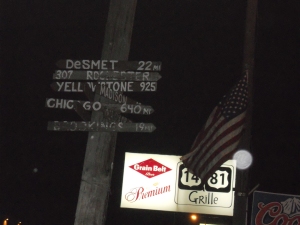 I hope to have a bison steak (finally!) instead of just bison burgers…although where else but the 1481 can you have a meal of Bison Burger, Buffalo Sweat, and Badger Buns?

But mostly, I hope my keet-ten is feeling better really, really soon (and wouldn’t it be great if there was a way for her to travel comfortably with me, in no fear of over heating or losing her to an amble on the high plains?).  I don’t like to leave her behind, and if I wasn’t already committed to several gigs some 1,700 miles from home, I’d stay put for now.

Quinn, about age 7, October 2005. Back in those days she had to put up with a beagle, a burmese, and a second person in the house! She’s much more spoiled these days, being undisputed Monarch of the Manor.

Just a few necessities for the Meet Laura gigs. Sometimes I almost forget which are the street clothes and which are “Mrs. Wilder’s.”

“That’s right, you saw what you saw.  That’s how we roll in the Shire!”